I’m a bit tired tonight. On Monday morning I did my swimming routine of 1 km in 33 minutes which was awesome. I had a private lane all the time since there was only the aquajoggers and the other lanes were full of schoolboys and slower adult swimmers, I was the only one on the ’fast lane’ and swimming with my hand paddles felt so good! During the night my shoulders and arms started to ache.

Yesterday I had my Pilates lesson and it was actually quite a tough one. I go to the advanced group since I’ve been doing Pilates ten years now. Today I haven’t been able to inhale deep since my back muscles are so sore, my abs aren’t even near so sore as the back is and my shoulders and arms were even more sore than the previous night. I had to put some piroxicam salve on them which I seldom do.

Today I went to a swimming technique lesson, for breast stroke. It went well and I learned the new technique (it’s been updated since I learned swimming as a kid) well enough. I also managed to get over my dislike of putting my face underneath the water which made me quite happy. There was six of us and the teacher was a quite nice lady and did good job with us.

Hubby came to the swimming hall to collect me and when we got home he made us dinner since I was so hungry, it was very nice of him. Now I’m off to bed and since it’s evening shift tomorrow and youngest one goes to school at 9 am I’ll get good long night. I hope I’ll get out of bed in the morning.

Last week I took youngest one to Jyväskylä which is a city in Central Finland, about 60 km north from our summer cottage. My cousin lives there and some of my friends too so it was nice to go and see them.

Jyväskylä is quite an active city due to a long history as a University town and it also has a very lively artistic side, i.e. the Finnish Handicrafts Society’s Museum is located there (they have awesome things in their shop). There’s also a blacksmith and yarn shop in an old house near my cousins place.

The neighbouring city of Vaajakoski hosts one of Finland’s candy factories called Panda. (Yes, like the black and white bear from China.) My cousin drove us there and we shopped chocolate and liqorice and chocolate liqorice. In fact we have now a lot of candy since bought quite a lot from the trip to Stockholm too.

We also did an empiric study of the local cafés with youngest son. We didn’t even get into all of them since there are so many! Our favourite was a place called Miriam’s, it’s a family owned small place where the owner and her brother do the cakes them selves and they are so good!

One night we went to movies with youngest one, we watched The Joker which was pretty awesome. I had my suspicions about it but it was good.

On Sunday we took a train back home. It was so nice to see my cousin and her little son but it’s also very nice to be at home. My cousin’s son has a genetic disorder which is very rare, he is one of three boys to suffer of it. The pain made him a bit cranky in the evenings which is understandable but my cousin said it was like a holiday for her too to see us and I said to youngest son that he’ll get an inkling now what it is to be a big brother.

On Monday morning I went for a swim before getting to work and it was nice. I bought hand paddles some weeks ago and they are wonderful except my left shoulder was pretty painful the whole week. I couldn’t even laugh because of the pain. Tuesday I went for my Pilates lesson which I absolutely adore and it did good for the shoulder too.

In the evenings I’ve been watching Netflix and knitting. I’m soon finishing a scarf I had to unravel during summer, now it’s much better. I still need to do the buttonhole strip for the  Scull and Roses-cardi, it’s been much too warm to knit it.

I also visited the workplace-doctor one day since I think my thyroid has grown and it needs to be checked with ultrasound. This is the third year it’ll be checked. Last year there was a very grumpy doctor doing the ultrasound, he told me that I can’t possibly feel the thyroid grown 0.2mm and that it’d be left alone. Well, I think it’s grown again and so I’m going to the ultrasound again. I hope it’s not him again doing the check-up, the doctor writing the cover letter was a very nice lady who took my concern for real. I also gave blood samples since I’m sweating like a pig on and off and if it’s not thyroid it’s the menopausal heatwaves. Yeah, nice being a woman.

Oh well, I’m trying to get some sewing done during weekend and I’ll try to visit a friend who got her toes operated last week. Now I’m going to knit and watch telly with the cat.

Today is my birthday and I’ve been celebrating the whole weekend I think. I’m not yet over the hill but as my friend said tomorrow is the last time when I’m under 50 on October 1st. We had a good laugh out of that.

On Friday I had coffee date with my two girlfriends in a local cafe which has a cake buffet, i.e. you get a big cup of coffee and as many slices of cakes you can eat, starting with three slices. The slices are small but delicious and since I love their lime-flavoured cake I usually have two or more pieces of that.

On Saturday I and youngest one begun to watch again all of the Harry Potter-movies which was fun. God, I’m still having hots for Lucius.

On Sunday evening we (our family and middlest son’s girlfriend) went for dinner to one of the more historically famous of Helsinki restaurants called Elite. It used to be the place for artists, authors and actors to go to and they still serve dishes which were the people’s favourite, i.e. Tauno Palo’s beef. Tauno Palo was a talented actor and very handsome, he was the Finnish romantic lead on big screen.

We took the underground train to city centre and walked through my childhood playgrounds, i.e. the Rock church to the restaurant which was nice. The dinner was very good and company was excellent and interior very nice.

This morning I started my fall swimming again. I’d bought hand-paddles since I’ve got  osteoarthritis the breast strokes can be painful for my hands and the paddles were just awesome except now my triceps are killing me. Anyways I did my one km in 36 minutes which was pretty okay as it’s the first time since last spring.

Then I went to work and heard that our water supply had been cut for some reason, the whole house was in uproar and nobody knew when we’d get water again. The water was cut also in the two neighbouring houses which was good so there were more people complaining about it. We had to make bathroom trips to the other side of the street where is a sports center.  The water company was just as out of sorts as we and nobody there knew nothing… Luckily the water came back on in the afternoon so the cooking classes could be held and people could use the bathrooms too.

After work I had a massage appointment again and I’m glad I did, my neck and shoulders are better now. This time the masseuse was another visually impaired young man I had met earlier couple of years ago. He is very nice and plays in the Finnish Goalball team.

Finally at home youngest one made us coffee, middlest son had washed clothes and hubby had bought me flowers. All in all a very nice birthday Monday. 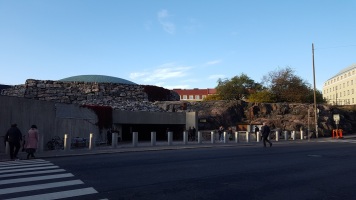 Last weekend we had our annual summer ending party with our friends coming to our house to barbeque (we call it grill), eat well and go sauna and have a nice meet. We’ve been doing this since the mid-90’s with my hubby and it’s really nice way to keep in touch with old friends. Now our boys had asked some of their friends to come too so we had more young people than us ’oldies’ this time. It doesn’t matter since they are very polite and nice people too.

We are having a fall-flu going around. First youngest son was sick at home three days and on Thursday hubby came home in the middle of the day and stayed home on Friday too. I had horrible headache all day yesterday. Luckily it passed but now I feel like I’m not totally well. I hope I’m not getting it now.

On Thursday morning I attended to a sport group near my work place. There’s a big sports center which houses a swimming hall too and I have bought a 10-time sports group  ticket which expires on mid-January and I thought I need to start using it so I don’t have to attend to the groups all December. I took part to a dance-sport group called Lavis which is based on Finnish social dancing called Lavatanssit.  The dances include tango, twist, rock/jive and some old folk dance steps. It was really fun and sweaty so I think I’ll go there again.

Oh and if you didn’t know, Finns are huge on tango, it’s been a great hit here for decades. Finland even has a great summer weekend festival for all tango people and there’s annual competition for tango singers too.

Here is a pic of me and my colleague Sari at our work in the Adult education centre’s library, it was takes two weeks ago and I think it’s quite nice pic of us.

I almost forgot to tell you that I enrolled to a swimming technique practice in November, it’s organized for the City workers. I’m taking part to one class which is specializing on breast stroke since I use it most.

Now I’m going to continue to watch ’Safe’ from Netflix and knit my cardi, I need to begin the second sleeve tonight. I really like Amanda Abbington but why is she cast as a police officer again? Meh.