This is just a quick post because I realized that October is ending and I haven’t written anything since mid-September.

I have been busy at work but as the school’s here have a so-called Fall leave in mid-October and my workplace is a school so I took the week off.

As DH didn’t have leave I went to summer cottage with eldest and youngest son. We managed to get the cottage warm even thou I forgot to take newspapers with us. We had nice time, went to sauna on both nights and managed to do the couple of things we were meant to; turn the row boat upside down and put locks on the barn doors.

Me and DH need to drive there once more since I forgot to close the fireplace dampers… Don’t ask how.

Then I took youngest son to Stockholm by ferry and it was nice. We had good food, ate breakfast at Mr Cake and visited our fave shop Scifi bokhandeln in the Old city. We also visited the Stockholm City public library’s main building which is very pretty.

About Mr Cake, if you’re familiar with the name Josef Fares or Fares Fares, Swedish actor and director brothers, Mr Cake’s owner Roy Fares is their cousin. I must say the Fares’ brothers movies are quite funny and I think Fares Fares was in the Westworld too.

Now we’ve turned the clocks towards wintertime and darkness approaches in other ways too.

I wonder what will happen with Twitter so I made myself an account on mastodon.social. You’ll find me there by this alias too, as I’m everywhere with it.

Here’s a pic from last night. My friend and I did a short roadtrip to seaside and Tammisaari and enjoyed the views.

Tomorrow I’m going away for two weeks again, this time to our summer cottage in Central Finland. Actually it’s not ’our’ cottage but my late Mom’s and now my brother’s but he is kind and lets me and the boys and the cat stay there couple of weeks every summer.

I’ve almost always during my 48 years been at the cottage some days or weeks except when I was studying and had to be at work but then I spent some weekends there with my parents. These days it’s a kind of net-break too because the Net only works on one place on the grounds if you hold your phone in a Lionking pose and also on the lake side which is about 200 metres from the cottage.

Two summers ago we only stayed for a week with youngest one there since it was the most horrible and rainy summer and it rained all week and you really can’t do much when it rains, just sit in the cottage and hope it goes away. We were also both miserable because it was the first summer without my mom and eldest son was at the army and middlest son was in Lapland hiking.

Last summer was better, me and youngest went to cottage first with the cat and eldest son came later with middlest one and his girlfriend and it was nice until they left to grocery shop some days later and trying to avoid a truck eldest son took the car too far onto the shoulder and the car broke, it went really badly on the other side and the motor broke and so on. They were lucky to walk out of the car but it was a Volvo so they got off just with a scare. Luckily the old Volvo was so old we had already discussed about buying a new car (a Volvo) and so we had to. It was a bit of a puzzle to get us all back to city in time for the school but my hubby and my brother helped and it was all right.

I hope this time everything goes well and we’ll have a nice warm two weeks off line. Here are some pics for you. The buddha was my sister-in-law’s idea and I find it oddly comforting, my mom was first a bit taken aback but later agreed with me. On the second pic you can spot the cottage and then there is the sauna and finally the lake which I really love.  We only have a small pier where you can go swimming and we have a rowing boat but it’s usually upside-down unless my eldest goes fishing with hook and line.  I like to meditate there and watch the clouds and small fish. 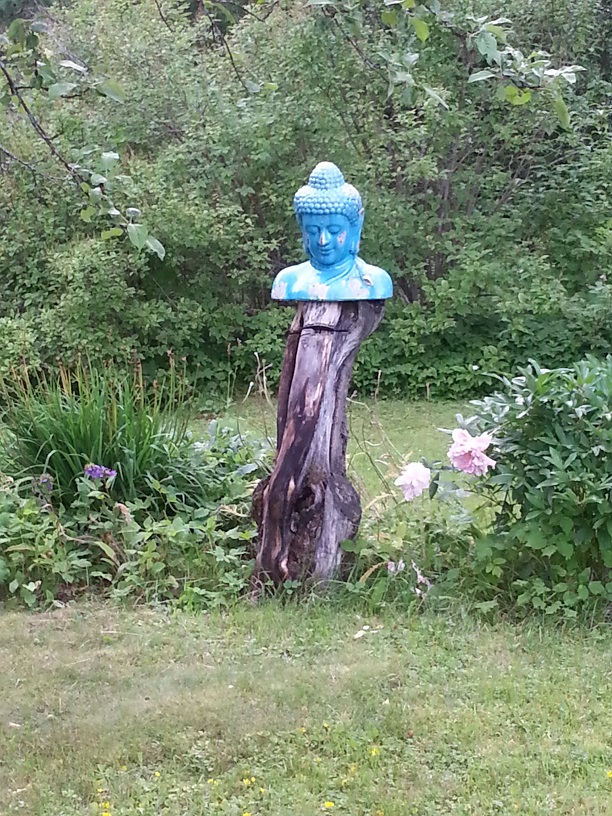